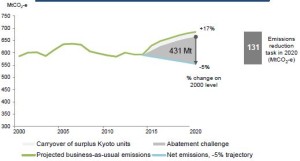 The graph shows the 5% carbon cut targeted by Australia by 2020 (on Yr 2000 level)...small as it is. Overall, it’s remarkable there's been such a bun fight over the type of policy to reduce emissions, when they are actually relatively similar. Essentially, both LNP and ALP require organisations to do projects that cut emissions, and the middle class pays either way.

The ALP “funded” the projects by price increases implemented by those big firms required to buy emission permits, while the LNP will fund it by normal taxation. (The additional irony is that the LNP successfully destroyed the ALP scheme by cleverly attacking it as a "carbon tax".)

It's worth considering if one advantage of the LNP system is that potentially the emission capturing net is wider... because the carbon reduction projects can be done by small, medium and large size organisations. No doubt there are improvements that can be made to the process, as well as the targets, but in the period of Green Paper discussion to come, the ALP, Greens, and other interested players should have a constructive look at the process... and not just reject it out of hand.

There is already a range of discussions of direct action in the public arena that should also be brought into this new stage of the debate. (EG http://theconversation.com/an-emissions-reduction-fund-could-work-if-well-designed-20460)

The fact that the net is wider under the LNP scheme could mean that it can potentially accommodate the larger than 5% targets that are obviously needed... subject to the usual issue of cost (via taxation!)

Essentially, we are in the early stages of implementing a carbon neutral economy, just as the world once dealt with cutting other emissions under the Montreal Protocol. I suspect that in several decades, providing runaway climate change has not upset the economic applecart altogether, we will wonder what took us so long to get on with doing it, and why it was all such an Aussie soap opera.

More details are in the Green Paper, and it’s also clear from it that there is still much to be worked out (but it can be and will be worked out). There is some further explanation, and a link to the Green Paper, here: http://www.abc.net.au/news/2013-12-20/coalition-climate-change-direct-action-policy-explained/5067188

Sorry, no Tweets were found.